Antiracism Resources at Your Library

To our brown and black neighbors and patrons, we hear your frustration and we see how oppression puts your lives and bodies in danger each day.

To our white neighbors and patrons, we need to support the people of color in our communities and we need to slow down, listen, learn and act.

The library has a variety of resources for people to start and continue learning, but the real work is challenging the biases and systems that perpetuate the oppression of black and brown people in the US. If you have not already begun, recent events in Milwaukee and across our nation show us – once again – that it is time to get talking about race, oppression, and bias with your family, friends, and coworkers.  If we don’t, nothing will change.

In May, Milwaukee County passed an ordinance on racial equity: https://www.racialequityalliance.org/2020/05/26/milwaukee-county-passes-ordinance-on-racial-equity/. Our county and communities within it are taking steps to dismantle institutional racism, and the road ahead is a long one. We all need to be walking along it.

Here are some resources to help you get started: How to be an Antiracist - Ibram X. Kendi

"The only way to undo racism is to consistently identify and describe it -- and then dismantle it." Ibram X. Kendi's concept of antiracism reshapes the conversation about racial justice in America -- but even more fundamentally, points us toward liberating new ways of thinking about ourselves and each other. In How to Be an Antiracist, Kendi asks us to think about what an antiracist society might look like, and how we can play an active role in building it. (Also available via Libby)

So You Want to Talk About Race - Ijeoma Oluo

Editor at Large of The Establishment, Ijeoma Oluo, answers questions readers don't dare ask in this timely exploration of today's racial landscape in the US. Her take is accessible and concise, addressing head-on such issues as privilege, police brutality, intersectionality, micro-aggressions, the Black Lives Matter movement, and the "N" word. Perfectly positioned to bridge the gap between people of color and white Americans struggling with race complexities, Oluo explains the concepts that continue to elude everyday Americans. (Also available on Hoopla and Libby) 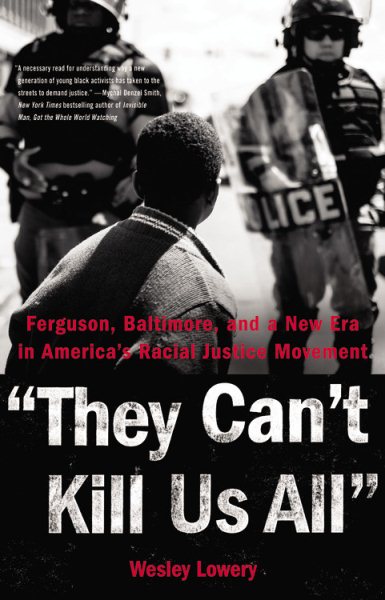 They Can't Kill Us All - Wesley Lowery

A behind-the-scenes account of the #blacklivesmatter movement shares insights into the young men and   women behind it, citing the racially charged controversies that have motivated members and the economic,   political, and personal histories that inform its purpose. Antiracist educator Robin DiAngelo deftly illuminates the phenomenon of white fragility. Referring to the defensive moves that white people make when challenged racially, white fragility is characterized by emotions such as anger, fear, and guilt, and by behaviors including argumentation and silence. These behaviors, in turn, function to reinstate white racial equilibrium and prevent any meaningful cross-racial dialogue. In this in-depth exploration, DiAngelo explores how white fragility develops, how it protects racial inequality, and what we can do to engage more constructively. (Also available via Libby)

Civil Right Advocate, Michelle Alexander explored the effects the War on Drugs has had on black and  brown communities via mass incarceration, limiting access to housing, employment, health care, etc. and tearing communities apart. (Also available via Hoopla and Libby)

Between the World and Me - Ta-Nehisi Coates

Coates explores race in America through a series of awakenings he had - be they through his myth-busting professors at Howard, the death of a friend who was shot by police or encounters with his relatives. (Also available via Libby)

As Ferguson, Missouri, erupted in August 2014, and media commentators across the ideological spectrum referred to the angry response of African Americans as 'black rage,' historian Carol Anderson wrote a remarkable op-ed in the Washington Post showing that this was, instead, 'white rage at work. With so much attention on the flames,' she writes, 'everyone had ignored the kindling.' Since 1865 and the passage of the Thirteenth Amendment, every time African Americans have made advances towards full participation in our democracy, white reaction has fueled a deliberate and relentless rollback of their gains. Carefully linking historical flashpoints when social progress for African Americans was countered by deliberate and cleverly crafted opposition, Anderson pulls back the veil that has long covered actions made in the name of protecting democracy, fiscal responsibility, or protection against fraud, rendering visible the long lineage of white rage.

The Fire This Time - Jesmyn Ward

National Book Award-winner Jesmyn Ward takes James Baldwin's 1963 examination of race in America, The Fire Next Time, as a jumping off point for this groundbreaking collection of short essays, memoir, and a few essential poems to engage the question of race in the United States. In light of recent tragedies and widespread protests across the nation, Ward knows that Baldwin's words ring as true as ever today and she has turned to some of her generation's most original thinkers and writers to give voice to their concerns. The Fire This Time is divided into three parts that shine a light on the darkest corners of our history, wrestle with our current predicament, and envision a better future.

The Fire Next Time - James Baldwin

"You know and I know, that the country is celebrating one hundred years of freedom one hundred years too soon." Baldwin's 1963 explores the consequences of racial injustice via two letters/essays, shedding light on how little has changed in America when it comes to race. (Also available via Libby) Laymon writes eloquently and honestly about the physical manifestations of violence, grief, trauma, and abuse on his own body. He writes of his own eating disorder and gambling addiction as well as similar issues that run throughout his family. Through self-exploration, storytelling, and honest conversation with family and friends, Heavy seeks to bring what has been hidden into the light and to reckon with all of its myriad sources, from the most intimate--a mother-child relationship--to the most universal--a society that has undervalued and abused black bodies for centuries. (Also available via Libby)